skip to main | skip to sidebar

So, yes, I've been MIA lately, but never fear, nothing is wrong.

In fact, everything is going exceptionally right! You see, behind the scenes here, I'd applied to a handful of MA programs in Medieval Archaeology... in England. Well, wonder of wonders, they all offered me a place. So, the next order of business was spending a week or two intensively researching all the programs, seeing what kind of financial aid I can squeeze out of each one, etc., until I finally came to a decision.

Thus, this Fall, I will be attending the U. of Sheffield, in their MA in European Historical Archaeology! Hello, student loan debt, my old friend! And in the meantime, I've been planning and executing the innumerable, redundant steps of the willfully obfuscatory Visa application process, brushing up on my background reading, and teaching myself a couple languages (Damn it, Latin! Why can't you be more like English?).

Needless to say, I've been busy, and when I'm not busy, I'm a tightly-wound ball of anxiety. All of this is to say, I might hop onto WoW from time to time in the next few months, but I'm really not counting on raiding any time soon. After that, between school and an additional five timezones between myself and most of my guild, I'm afraid WoW will be chilling in the recesses of my hard drive. With any luck (bang on wood), a PhD studentship will come along by next year, so that's another 3+ years of madness.

But this is a happy time. This is what I've been working toward since... well, since I was a grade-school kid reading books about the myths and legends of ancient civilizations. So don't think of me as quitting WoW - I just won't be playing it for a long time.
Posted by Eidtalheg at 2:43 PM No comments: Links to this post 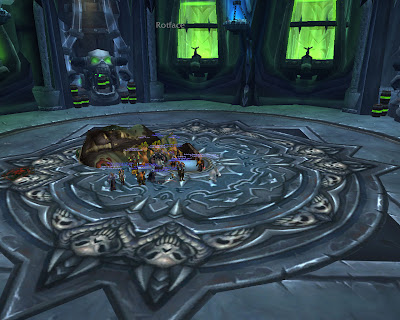 It's inexplicable, really. We've been trying for weeks to take Rotface down, bringing him as low as 3%, but never quite making it before being overwhelmed. Then, last night, everything just clicked - slime pools were circumnavigated, oozes were kited expertly, and everyone got the hell out of the way when they exploded. Fully expecting to spend at least an hour on the fight, we proceeded to one-shot it. *shrug*

What this meant, of course, was that as soon as we headed over and killed Festergut (who is essentially on farm status now - though he refuses to acquiesce to my demands for footwear), we would be facing Putricide for the first time. It's an interesting fight, and frankly seems less fiddly than the ooze-wrangling of Rotface. There are, in fact, oozes to wrangle, but dealing with them is wholly reliant upon proper player movement and sufficient dps, rather than a somewhat unpredictable pathing A.I.

We made solid progress as we learned the fight, bringing the good Doctor down to ~50% on our last attempt. It will be interesting to see how we handle phase 3; on one hand, no more gas clouds or volatile oozes to deal with; on the other, the tanks and healers will have more to worry about...

In other news, I've made the switch to a Marksmanship spec - having acquired the two-piece T10 bonus, its inherent potential for abuse in conjunction with a properly-timed serpent sting and chimera shots made this a foregone conclusion, and my dps last night definitively bore the assumption out.
Posted by Eidtalheg at 6:29 PM 1 comment: Links to this post

A Moment of Your Time

As you are probably aware, a 7.0-magnitude earthquake struck Haiti on Tuesday. Casualties are in the hundreds, at least; estimates reach into the thousands. Exacerbating difficulties in aid and rescue is the damage done to the nation's already weak infrastructure. I suggest making a donation to the humanitarian agency of your choice.

Edit, 1/15/10: Estimates are now placing casualties in the 100,000s. Disease is rapidly becoming a concern.
Posted by Eidtalheg at 3:54 PM No comments: Links to this post

It Never Gets Any Easier

The guild's raiding has, indeed, progressed beyond Saurfang in the weeks following my last post. In the interim, one group - once - has managed to take down Festergut. Full stop.

It is somewhat analogous to an unholy amalgamation of Patchwerk and Loatheb, except the spores in this fight, rather than boosting your DPS, boost your immunity to the incoming massive raid damage. The DPS is up to you, and boy howdy, do you need a lot of it! Festergut has a five-minute enrage timer, and 9.4 million health in his 10-player iteration. That means, assuming two tanks and two healers, a minimum of 5k DPS from everyone else, or you lose.

That brings us to tonight's attempt at ToGC. We were feeling cocky - ok, I was feeling cocky - I mean, we've cleared ToC dozens of times, and now we've even got a few pieces of gear from the next tier of content! What could go wrong?

...let's just say they don't call him Gormok the Impaler for nothing. Those poor, poor tanks.
Posted by Eidtalheg at 10:06 PM 2 comments: Links to this post

There Ain't No Sanity Clause 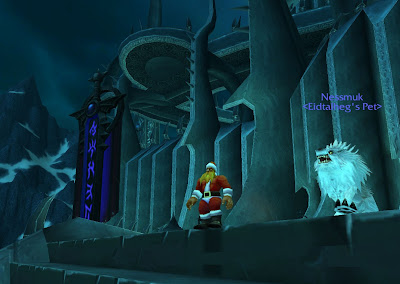 Last night, I made my long-delayed entrance into Icecrown Citadel, and lo, it was good. Well, pretty good.

Being that it was in the midst of the holiday weekend, this was something of an impromptu event, with only a handful of signups and the rest made up on the spot. There had been two full raids earlier in the week, which meant most of our raiders' mains were locked out, leaving about half the raid to be filled with slightly less well-geared alts. I'm fairly sure this was what determined the upper limit of our progress for the night.

In broad overview, we successfully moved through Marrowgar, Deathwhisper, and the gunship event; we put in several very good attempts at Saurfang, but ultimately couldn't take him down. I found all of the encounters so far quite enjoyable. I don't believe any of them are difficult in terms of execution, but they do require everyone to pay attention, making for some engaging, interesting fights.

The Deathbringer Saurfang encounter is definitely a gatekeeper for the next segment of the raid. Last night our gear was well and truly checked, and found... wanting. The guild has taken him down in previous weeks, with our best-geared raiders, but that gear margin is clearly the difference between success and failure here. By our last attempt, we had what I feel is a sufficiently tight strategy: slowing the Blood Beasts with a frost trap while focusing fire on each, one at a time, kiting with everything we've got - Distracting Shot, Concussive Shot, Disengage - yes, hunters, rejoice, for this fight makes us specifically useful! The problem we ran into was the amount of time it took to kill each Beast; by the time the first was down, the second had made its way to a delicious healer. If there had been two hunters in the raid, I'm sure we could have kept them both occupied, but as it was, our DPS just wasn't sufficient. We ended the night on our best attempt, with Saurfang at 15%, and his mighty cleave dropping me to 0%, the bodies of my comrades strewn about the terrace.

Still, I'm happy with our effort, and looking forward to killing the bastard for many weeks to come.
Posted by Eidtalheg at 6:32 PM No comments: Links to this post

If You Can't Beat 'Em

Since my gaming PC is out of commission, I've been reduced to hunkering down before the glow of my laptop, so raiding has been put on hold. However, after getting used to finessing the latency, I've found 5-mans are within its capacity, and have been exploring the wonderful world of cross-server PuGs.

My experience so far has been about what you'd expect; groups have ranged from casually-paced and chatty, to dead silent and chain-pulling like there was a prize for clearing the dungeon in under five minutes. Many have been perfectly competent, and while some groups have ultimately failed and fallen apart due to unfamiliarity with the new Icecrown dungeons, I have yet to encounter any true incompetence. Don't worry, I'm sure it'll show up sooner than later. I think I can give no better endorsement than to say that I'm going to be using this thing every day, whereas I never used to run with PuGs. ...all those extra badges may or may not have something to do with it >_>

The new dungeons themselves have been fun, with some interesting mechanics. Bronjahm is quite possibly the coolest, both tactically and musically, while the latter half of Halls of Reflection is suitably demanding for everyone, especially tanks, which reminds me...

I love new Misdirection! No more DoT ticks using up the effect before the trash actually reaches the tank! I did prefer the original animation, and I'm not sure why it was changed, but eh...

Ok, finally, the mammoth in the room: the new ammunition engineering schematics from the Ashen Verdict faction. The Iceblade Arrow schematic requires Gnomish engineering, while the Shatter Rounds requisite specialization is Goblin. There has been much head-scratching concerning the explanation for segregating ammo-crafting in this way. For one thing, among end-game ranged weapons, bows and crossbows significantly outnumber guns. This makes one specialization much more desirable than the other, both for hunters who happen to be engineers themselves, and in terms of market value for non-hunter engineers. Granted, as a dwarf hunter who strictly runs 10-man raids, the best weapon available to me happens to be a gun, and I'll be putting my Goblin engineering to good use. Still, I can understand the frustration of 25-man raiders and non-dwarves generally.
Posted by Eidtalheg at 9:36 AM No comments: Links to this post

[2.GuildChannel][AwesomeTank]: Hey, need 1 more DPS for a run through all three new heroics!

[ReallyGreatHealer] whispers: Would you like to join our hFoS group? :)

So, why am I sitting here, writing a blog post, like some kind of shut-in Twilight fan? Why am I not laying down a whithering hail of artillery upon the minions of the Lich King?

It is because I sinned against the gods of Geekdom in purchasing, rather than building, my newest PC, which has been nothing but an unstable hulk of silicon and various conductive metals since the day it arrived. As we speak, it is in the shop, where even the most highly-skilled technicians are at a loss as to how so much suck could be concentrated into a single machine.

In other words, if Arthas is victorious, and the civilizations of Azeroth are reduced to shambling mockeries of their former glory, you'll have only Gateway Computers to blame.
Posted by Eidtalheg at 6:31 PM No comments: Links to this post

Just Made of Win